This past Saturday, I attended Whirl Magazine’s 2nd Annual One Whirl Yoga Fest & Healthy Lifestyle Expo in Pittsburgh! The festival was held at Point State Park (in Downtown Pittsburgh). This was my first year attending the festival and I anticipated it for months!

(*Head’s up: I will post links below to: Whirl, the Yoga Festival, social media, the yoga studios I mention and the food trucks*)

This year, the yoga festival was $35 for an all-day pass of yoga (which I thought was a great deal)! In my opinion, as long as you (at least) attend two classes, you earn your money back. Creating an all-day pass made registration easier for both WHIRL and the yogis attending the festival.

I arrived to the festival at 12:10pm. The first workshop I participated in was “Yoga with a Kick”, instructed by Christine Summer of Sijahk Yoga. Sijahk yoga is located in Greensburg, Pennsylvania and is Christine’s personal combination of Yoga and Taekwondo. Sijahk yoga offers: hatha, therapeutic, sijahk yoga, yoga and emotional freedom technique and self-defense classes. Also, Sijahk Yoga is available for: 1) outdoor adventures, 2) yoga parties  and 3) private sessions.

Ms. Summer’s class was wonderful! She combined the sun saluation and vinyasa yoga with Taekwondo. This was a nice change from a typical yoga class. Also, we did a lot of partner work as well as practice yoga in lines and circles. This was a great way to meet fellow yogis in the Pittsburgh community. I’m so glad I stumbled upon this class!

Once Christine’s class ended, I moved right into a “Power Yoga” class with L.A. (Lee Anne) Finfinger and Stacey Vespaziani of South Hills Power Yoga. I mentioned South Hills Power Yoga in a previous post (http://healthkicklady.net/2013/07/21/review-of-kendell-romanellis-moon-salutation-workshop-at-south-hills-power-yoga-dormont/), which I encourage you to read. Both instructors received their initial yoga teacher training with Karen & Sean Conley of Amazing Yoga (one of the most prestigious yoga studios in Pittsburgh). Both ladies have trained with renowned yogis, such as: Baron Baptiste and Bryan Kest.

L.A. and Stacey’s power yoga class was both challenging and rewarding. I’ve done a power yoga DVD, but I’ve never taken a power yoga class. I’ve attending several vinyasa yoga classes (in fact, Power Yoga is the westernized version of vinyasa yoga). I wished to attempt L.A. and Stacey’s class at the Yoga Fest to decide if I should visit either (or both) Dormont and/or Peters Township studios. I was enrolled in a workshop at the Dormont studio, but I’ve never taken a regular class at South Hills Power Yoga.

Both L.A. and Stacey’s sense of humor assisted me to transition from asana (yoga posture) to asana. In my opinion, Power Yoga is vinyasa yoga taken to the next level. It’s a little more challenging than your typical vinyasa class. The basic and all-level yoga classes at South Hills Power Yoga are heated (90+ degrees). For now, I think I will stick with non-heated classes- the workout itself was enough of a challenge for me. Even so, I would love to try a gentle/restorative class at their Peters Township studio (which is an non-heated class). Also, I would like to attend another workshop with them.

Stacey and L.A. switched between teaching and assisting the students. L.A. was so helpful with her modifications and adjustments! I remember meeting Stacey when I attended the Moon Salutation workshop. She was so friendly! I would definitely attend more classes with L.A. and Stacey.

After two hours of yoga, it was time for lunch! First, I grabbed a hand-crafted chocolate milkshake from BRGR food truck.

(photo taken by me.)

BRGR has two restaurant locations: one in East Liberty and another in Cranberry. Also, they have a food truck. The food truck is often found parked in either Downtown or Shadyside. Also, it attends several Pittsburgh events (such as One Whirl Yoga Fest).

Wow! Let me tell you, that was one of the best milkshakes I have ever had! I was too excited and too thirsty to take a picture of the milkshake, but here is a nice shot of the truck.

Next, on to PGH Crepes (a Pittsburgh crepe cart). The PGH Crepe cart is parked on Liberty & 5th Avenue (in Downtown Pittsburgh) Monday through Friday. Saturday, you will often discover PGH Crepes at 20th street at Penn Avenue in the Strip District. 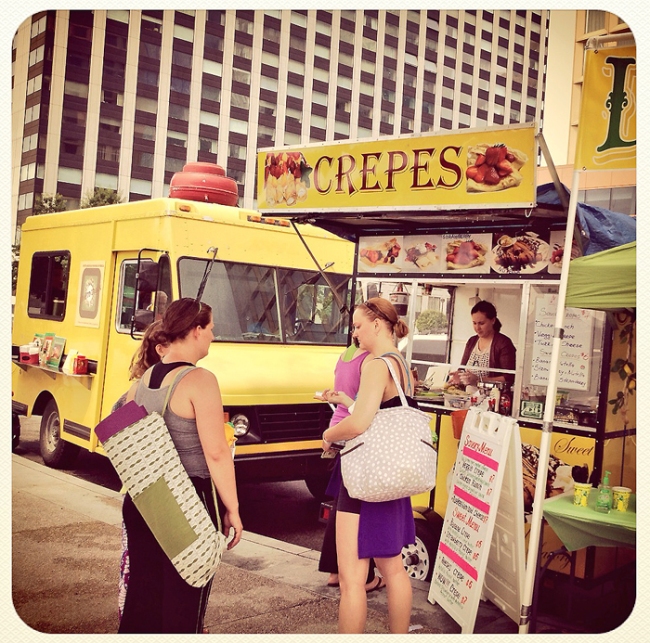 (another photo, captured by me!)

I ordered a Turkey, ham & swiss crepe for lunch. Let me tell you, folks: one of the best crepes I’ve ever tasted! 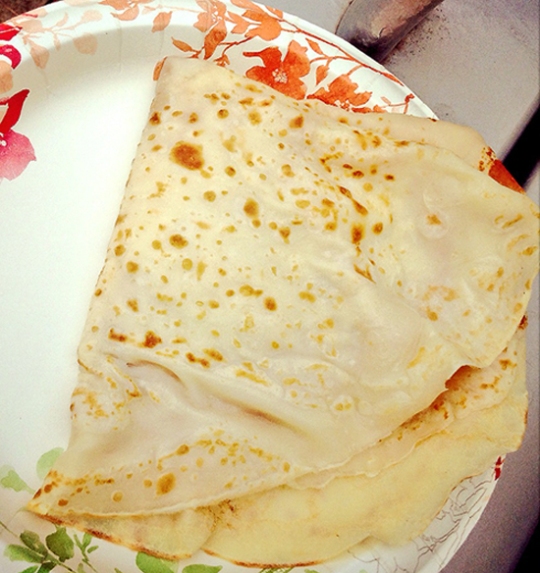 Three hours at the Yoga Festival, I decided to take the T (the subway in the ‘burgh) home. What a great day! I received a two-hour yoga workout; I had a chance to learn about a yoga studio that is 1.5 hours away from my house. Also, I decided that I will have to try a class at South Hills Power Yoga! Lastly, the best reward of the day was lunch from two Pittsburgh food trucks!

Here we are, at the end of this post. What did you think of my review of One Whirl Yoga Fest? Please, either leave a comment below, “like” this post and share it with your friends! If you know of any Pittsburgh yoga classes and/or studios I should try, tweet me (@lauraelizabethj), or just tweet me if you liked this post! Do you have a favorite yoga pose? Have a friend take a photo and Instagram it to me (@artwritdesign86). Also, do you have food trucks in your state, province or country? Don’t be afraid to let me know.

*Stay tuned for a Pittsburgh Food Truck Round Up post!*