*DISCLAIMER*: I neither own the rights to Attack Theatre nor the food trucks involved at this event. I’m just a blogger who wishes to share my experience at THE DIRTY BALL with others! 🙂 Also, all photos were captured by me. I do not seek monetary gain for these photos.

This past Sunday, I attended Attack Theatre‘s ninth annual fundraiser, titled “The Dirty Ball”. The fundraiser was held at Jane Street Warehouse in the South Side neighborhood of Pittsburgh. Let me tell you: Attack Theatre couldn’t chosen a better venue for this event! It was PERFECT! 😀

One of the co-chairs of the event (PGH NEWBIE) was kind enough to give me tickets to The Dirty Ball. Since they were free tickets, I assumed the tickets were general admission tickets (good from 8pm-12am). To my amazement, I discovered the day before the event that the tickets were “Dirty Donor Tickets”! 😀 What does this mean? Well, my best friend from college and I were admitted to the pre-reception, the velvet lounge AND the main stage events at The Dirty Ball! 😀 Also, we had V.I.P. parking (right in front of the food trucks)! 😀

The pre-reception was VERY nice! Two performers from Attack Theatre performed a private performance for all of the “Dirty Donors”, as Chatham Baroque simultaneously played lovely music! The catering for the pre-reception was provided by E2. I learned E2 is a restaurant located in the Highland Park neighborhood of Pittsburgh. E2’s food can be subscribed as Mediterranean lighter fare. The food was FANTASTIC! Here’s what I had: a white bean salad with onions and artichokes, an anti-pasti salad with mozzarella slices and red bell peppers, a REALLY good noodle salad and a garden salad with goat cheese! Very healthy, too!

The next element of the pre-ception that I REALLY enjoyed: libations (lol)! Two mixologist were present at the pre-reception; one was from Tender Bar & Kitchen (located in Lawrenceville) and the other was from Verde Mexican Kitchen & Cantina (Lawrenceville/Garfield neighborhoods). Both of my drinks were prepared by the LOVELY female mixologist from Verde. The drinks matched the theme of the night (Pirates vs. Robots). My first drink was titled “Elizabeth Swann” (I don’t remember all of the components of the drink, but I know there was Clique Vodka and Chocolate Liquor), and the second drink was “Optimus Thyme” (Wigle Whiskey White Rye, Thyme, Lemon and other ingredients I can’t remember). Although I enjoyed both drinks, I preferred the “Optimus Thyme”. That has a nice, clean lemon-y taste, and wasn’t quite as strong as the Elizabeth Swann drink.

Once the clock struck 8:00pm, we moved downstairs to the main warehouse space, where the main events took place. There was a nice table of food (my friend and I hit up the table while they are still setting up. Thus, we grabbed two homemade cookies! I had one chocolate chip and one thumbprint cookie) in the center of the lobby. Slightly behind the food table was the libations station, with Clique Vodka and Yuengling featured as two of the events’ sponsors.

The Dirty Ball provided attendees with interactive games on big screen TVs! One of the games my friend and I played was “guess the celebrity butt” lol. Another game involved dancing in front of the camera. Then, the computer would translate your dance moves to either the Pirate or the Robot on the big screen monitor.

My friend and I also noticed a “Battle Royale” that took place between two remote-control robots. Eventually, several of the party-goers crowded around the main stage, awaiting Attack Theatre’s first performance of the night. Some spontaneous dancing broke out amongst the brave cosplayers:

In regards to the costumes, one observation I noticed was DIRTY BALL participants didn’t have to follow the PIRATES vs. Robots theme. Really, anything goes! My friend and I spoke briefly to the Vice President of the Board of Directors for the Attack Theatre, and that’s one aspect of Attack Theatre (and The Dirty Ball) that he really appreciates. He said that “you will notice, there are all sorts of costumes and dress. There’s no judgment”, and I really love that!

Next, my friend and I watch Attack Theatre‘s first performance of the night, which had a Pirate-themed plot. I must admit: this was my first time watching Attack Theatre perform, and they are one of THE BEST dancing troupes I’ve EVER seen! I would define their style of dance as both modern and contemporary, but Attack Theatre takes these dance mediums and puts its own unique spin on everything. If you ever have the opportunity to attend an Attack Theatre performance, I HIGHLY recommend it!

Later on, we walked over to the V.I.P Velvet Lounge! In the main area, there were champagne cocktails (which were INCREDIBLE! Those were provided by Perle) and oysters (from Nola on the Square). The main area expanded into a large “lounge” area, with the two mixologist, food provided by La Tavola and Hyde Park, robot mannequins, music and plenty of tables & chairs to sit and enjoy the entertainment!

For this event, I decided to purchase a taco from the PGH Taco Truck (which I’ve been craving for TWO YEARS! I was finally in the same location as the truck).

I ordered the Thai Peanut Chicken with Chili Slaw taco. best. Taco. EVER! James, you are a taco GENIUS! 😀 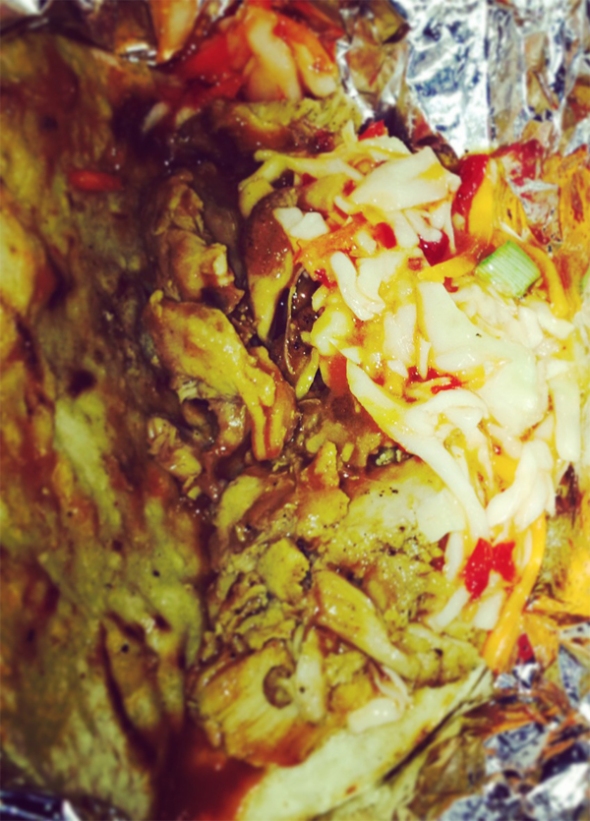 I apologize for the quality of this photo. It’s VERY hard to capture a photo of a taco while actually holding the taco in the other hand (in the car, while it’s moving lol). Anywho- I consider this glorious plethora of food a site of BEAUTY! I loved the combination of the savory taste of the peanut with the spiciness of the slaw. James: I WILL be back for more tacos! 😀

Here’s another shot of the truck. 🙂

Well, there you have it folks! Next year, if you are a patron of the arts and you’re looking for a unique “night on the town” with either friends or a significant other, I HIGHLY recommend attending Attack Theatre’s Dirty Ball! 😀