A beautiful shot of the Morcilla sign that I captured around 7:30am on a Wednesday morning (after yoga practice in Lawrenceville)!

*DISCLAIMER*: Neither Justin Severino nor the management and staff of Morcilla asked me to write this post. i am just a Friendly Pittsburgh Foodie and Yogini, whom enjoys sharing her foodie and yoga adventures with others! Photos captured on an iPhone 5s, and were edited with Adobe Photoshop CS4 Extended and Instagram.

Towards the beginning of November of last year, I celebrated my “30 & fabulous” birthday! Even though I have been DYING to dine at Morcilla (located in the Lawrenceville neighborhood of the city of Pittsburgh), I knew I wanted to “save” dinner at Morcilla for my 30th & fabulous bday dinner #1!

While my Mom and I waited for the food, I enjoyed this Tonic, with: chinchilla, lavender and cardamom. Sooooo good!

Since Morcilla is a Tapas bar, my Mom and I ordered a few “small plates” and shared them throughout the night: 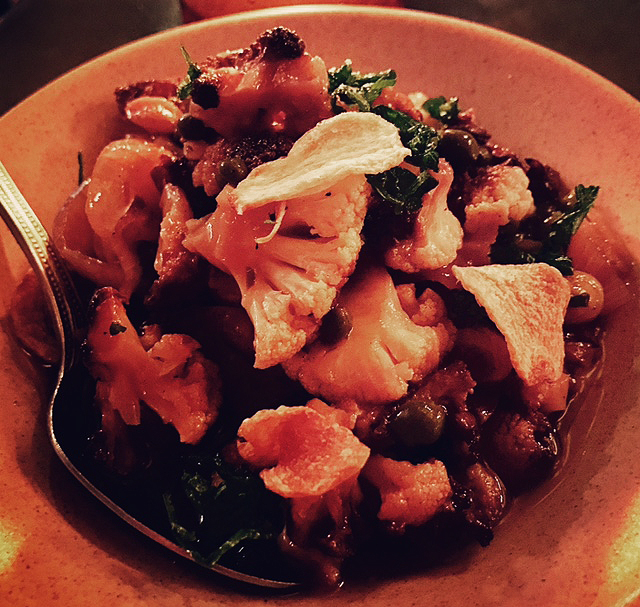 Picked Cauliflower Catalan– golden raisins, capers, garlic and sherry vinegar. I am a sucker for a good cauliflower dish, and I must say this was one of THE best ones I’ve EVER had!

Jamon Iberico De Bellota– marcona almonds, four year aged Pata Negra, Castilla Leon, Spain. PEOPLE! I had Jamon (which my hero Anthony Bourdain says is THE best ham in the WORLD). Even though I prefer the taste of Prosciutto, I must say this ham was DAMN good! I really enjoyed wrapping up each slice around one of the Marcona Almonds. Take my word for it, splurge on the $25 appetizer and share it amongst your group!

Morcilla (blood sausage)- although it’s currently not on the menu (hopefully, Morcilla will bring back its namesake dish), I just HAD to order some Morcilla! I’ve only had blood sausage once before at an Argentinian restaurant in Pittsburgh, and I must say this Morcilla (imported from Spain) was WAY better! I’m very glad that I ordered this dish!

Who Cooks For You Farm “Rocky Balboa” Salad– also not currently on the menu. Even so, this was my FAVORITE dish of the night! Literally THE best salad I’ve had in my enter LIFE! 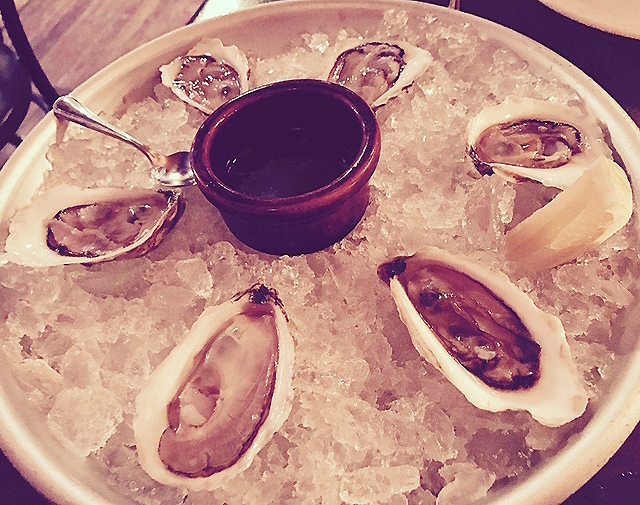 Spring Creek Oysters (Barnstable, MA) half dozen– oh. My. GOSH! Theses were so good! I’ve never tried oysters before, and since Bourdain loves them, I decided to be bold and try them! They were so fresh, I swear you could taste the ocean water!

As Rebel Wilson would say: “crushed it”!

Since the staff learned it was my birthday, they brought out a complimentary Crema Catalana (the Catalan version of Creme Brûlée)! I also ordered a Cafe Americano from Commonplace Coffee (love them)!

Thank you to Justin Severino, Hilary Prescott Severino, Nate Hobart and staff for a WONDERFUL first dinner (and birthday) experience at Morcilla! I shall return!

Next up: birthday dinner #3 at Spoon!